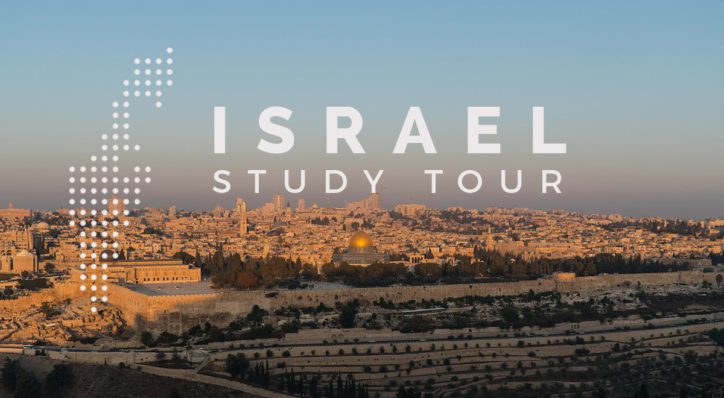 After the profoundly impactful disciple-making summit hosted by Concentric in 2008 that saw over 250 leaders gather in Israel from across the globe, the Concentric leadership team decided to host smaller Israel study tours where each partner organization would bring five of their emerging leaders. I was privileged to be among the fifty ministry leaders on that first Concentric Israel Study Tour in 2010. To say it was life-changing would be an understatement!

I hadn’t even stepped foot in Israel, and I was blown away by what God was going to do. I learned a week before the trip that my roommate in Israel would be a youth pastor from Illinois who was being mentored by Dann Spader, Sonlife’s founder. Pete Sutton was a student in the first youth ministry I led out of college, and he was now the middle school pastor at that same church. Pete and I would have a great two weeks together in Israel, catching up with one another, learning and processing our experience, floating in the Dead Sea together.

One of my first unforgettable memories from that Israel Study Tour was our visit to the Judean Wilderness. We were given 30 minutes to be alone with God, to pray, and to think about Jesus’ experience there during His 40 days of being led into the wilderness by the Spirit. The barren beauty of the wilderness stunned me, as the thought gripped my heart that Jesus’ eyes saw what I was seeing, His feet walked where I was walking. This was a place untouched by time. There was a sense of intimacy, of invitation, in the solitude of that barren place.

From Judea, we traveled up to Galilee, stopping at the Nazareth Village for a day. One of my favorite places in Israel, without a doubt, is the Nazareth Village. The expert guide walked us through the recreation of a first century village, complete with a vineyard, a winepress, an olive grove and olive press, a shepherd and his flock, homes and a synagogue. The guide’s instruction tied in stories from the Gospels, explanations of parables and cultural insights.

Driving from Nazareth down to the Sea of Galilee is a sight you must see and experience for yourself. Words cannot adequately describe the mix of beauty and wonder of this place. All around the Sea of Galilee, location after location, we walked where Jesus walked and opened the gospels to dig deeper into His life and ministry. From Kursi, where Jesus freed the demoniac and sent the demons into the herd of pigs, to Bethsaida, where He multiplied the loaves and fishes and fed the five thousand, to Capernaum, where His ministry was based and He called the four fishermen to be fishers of people, to Mount Arbel, the possible site of the Great Commission, everywhere you step foot you can’t help but think of what Jesus did when He walked where you’re standing.

From Galilee, it’s a short drive up to Caesarea Philippi. This is where Jesus took His young disciples and asked them, “Who do you say that I am?” After Peter’s bold declaration, “You are the Christ, the Son of the Living God,” Jesus spoke the words that have reverberated through the centuries. “Upon this rock, I will build my church, and the gates of hell will not prevail against it!”  In Caesarea Philippi, there is a crevice at the base of the rock-faced cliff that was actually described as the “gates of hell.” A pagan temple was erected there because it was believed that the spirits traveled from the underworld to this world through that crevice, thus it was known as the gates of hell. The water that flowed from out of that crevice formed a pool at the base of the rock, and as part of their pagan rituals, the pagan priest would climb high atop the rock and cast infants down into the water below to appease their gods. Yes, Jesus went to the place known as the gates of hell, a place of pagan worship and child sacrifice, a place of utter darkness, and declared that even in a place like that He would build His church. One feels the power of Jesus’ words in a whole new way when standing in the shadow of the gates of hell.

Our Israel Study Tour visited site after site, as best as possible in chronological order from the life of Christ. Returning to Jerusalem at the end of our two weeks to focus on the Passion Week was incredibly powerful. The Church of the Holy Sepulchre, the traditional location for Golgotha and Joseph’s tomb, was flooded with religious travelers on a holy pilgrimage. The serene setting of The Garden Tomb, with gardens, an actual tomb with a stone rolled away, and a view of what could have been the outline of a skull in the rock face that would have provided the name for Golgotha, made for the perfect setting to reflect, worship, and celebrate the Lord’s Supper together.

Closing out our study tour, we spent time on the Mount of Olives, the location of Jesus’ ascension, and then at the southern steps of the temple, where Peter likely preached at Pentecost, for a final challenge and commission to return home as disciple-making leaders building upon the movement that Jesus started 2000 years earlier.

Since my first trip to Israel in 2010, I’ve returned several times, bringing other leaders to use the landscape of what’s called “the fifth Gospel” to fan the flames of disciple-making and further equip them to multiply the movement Jesus started. We were scheduled to be in Israel the week that Covid shut the world down in March 2020. We rescheduled that trip twice, postponing each time because Israel still wasn’t open for touring. So we’re thrilled to be able to offer an Israel Study Tour once again in partnership with Ancient Path Disciple-Making in the Spring of 2023. For those who join us, I know that encountering Christ in Israel will have as great of an impact on your life as it did mine twelve years ago. Learning to “walk as Jesus walked” by walking where Jesus walked is an experience you will never forget!

Photo of Jerusalem by Josh Yates.