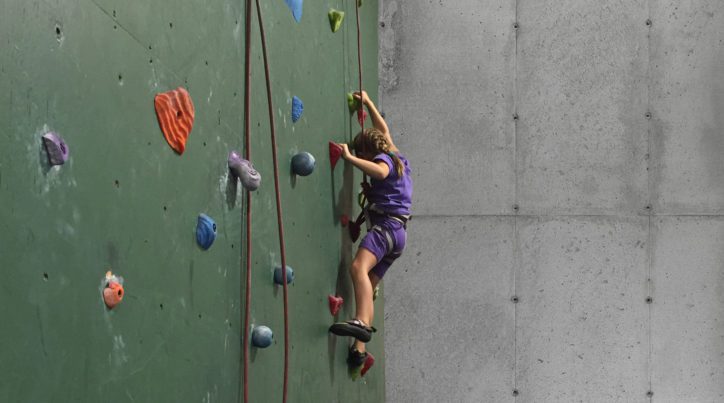 Dean Plumlee
Yesterday, we (Dean and Amy Plumlee) cashed in the free gift card to take our kids to the local rock climbing gym.  We could never have imagined how much they’d like it and how much we’d learn.  As soon as we entered I was immediately intimidated by the instructor’s biceps and quickly went into a conversation with my wife about how I hadn’t been working out but if I had, I could look ripped – just like her.  She actually looked like she just stepped out of “Climbing” magazine with the outfit, the gear, and the perfectly placed tattoos.  As the day unfolded we found that she had the skills to match the look.
Then, there were our kids.  Our daughter, age 6, woke up with the need to wear purple this day.  By the time she had finished assembling her ensemble she looked like Barney had been shot by a shrink ray gun.  But, that didn’t seem to matter to “KT, the instructor”.  In fact, she treated my kids just like the girl about to go pro and the guy telling everyone he was going pro (not gonna happen) and everyone else.  It was as if she wasn’t gaining her value from her students.  But instead, she was stoked on climbing and invited every person to get stoked on it too.
She started getting my kids all decked out in gear and I noticed that as she did, she explained what she was doing.  She didn’t just rush through the task to completion but was helping our kids understand what she was doing and why almost assuming they’d be doing it for themselves some day.  Within moments my kids were standing at the base of Everest tying in to belay ropes.  Again she didn’t just tie the rope.  In a completely none condescending way, she showed them how to tie the knot.  But, she wasn’t teaching them, she was training them, preparing them to do it themselves.  She didn’t assess them and decide what each one was capable of.  She treated each one with respect and worked with them at their pace, correcting and guiding and increasingly handing off the skill to them.  Now, I wasn’t initially excited about my 6-year-old baby girl hanging 30 feet off the ground by a knot she tied.  Seriously!  This is dangerous.  Just tie the knot and she can take a knot tying class when she gets older.  But that wasn’t the mindset of “KT – the instructor”.  In fact, at one point I heard her telling my son not to use his knees because it’s “poor form”.  POOR FORM!?!  Are you kidding me?  Do you realize that this is the first time my kid has ever done this and it’s a total 50/50 if he’ll ever do it again?  But that wasn’t the perspective of “KT – the instructor”.  She treated everyone as if someday they’d be as stoked on climbing and as skilled at climbing as she was.  In fact, I was amazed how she was training our kids to enjoy climbing someday without her.
And then there’s Jesus.  A year and a half into His ministry He grabs four guys (eventually growing it and adding girls) and begins training them in the skills they’ll need to be stoked on God and make disciples when He’s no longer around.  I began to think how He didn’t care that others had assessed Peter and John as just idiotas (greek-acts 4:13).  Instead, He invested in them and trained them at the rate they received it.  In fact, we see Him with the masses 17 times but from that point forward 46 times He’s with the few and in those times we see Him explaining what He’s doing and not merely teaching them but training them – practicing tying knots with them.  I’m amazed in John 3:22 that He’s allowing them to participate in the ministry when they are such rookies.  Doesn’t He realize that this is dangerous?  Then I  think about Luke 9 and 10 when He sends people out to “climb” without Him and how they come back all fired up and telling amazing stories.  Jesus seems to have had a disciple makers mindset.  The mindset I observed in “KT – the instructor” yesterday.  I pray God grows that mindset in you and I.
What are some things about “KT – the instructor” that remind you of Jesus?