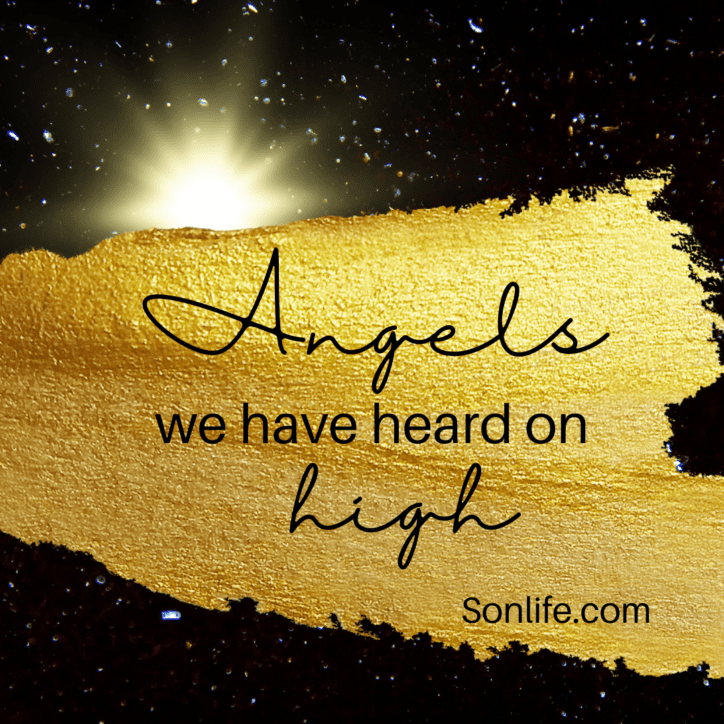 “In those days Caesar Augustus issued a decree that a census should be taken of the entire Roman world. (This was the first census that took place while Quirinius was governor of Syria.) And everyone went to their own town to register. So Joseph also went up from the town of Nazareth in Galilee to Judea, to Bethlehem the town of David, because he belonged to the house and line of David.”

Luke gives verifiable details to place the story, the birth of Christ, in historical context.

All these details are part of the historical record. They’re important. They tell the story. But not the whole story.

In Luke’s Gospel, that curtain is peeled back and the activity of angels on the earth is made visible in the story of Chrit’s birth.

The angel Gabriel appeared to Zechariah to tell of John’s birth.

“Then an angel of the Lord appeared to him, standing at the right side of the altar of incense. When Zechariah saw him, he was startled and was gripped with fear. But the angel said to him: “Do not be afraid, Zechariah; your prayer has been heard. Your wife Elizabeth will bear you a son, and you are to call him John.”

The angel appeared to Mary to tell her she would give birth to the Son of God.

“The angel went to her and said, “Greetings, you who are highly favored! The Lord is with you.” Mary was greatly troubled at his words and wondered what kind of greeting this might be. But the angel said to her, “Do not be afraid, Mary; you have found favor with God. You will conceive and give birth to a son, and you are to call him Jesus. He will be great and will be called the Son of the Most High. The Lord God will give him the throne of his father David, and he will reign over Jacob’s descendants forever; his kingdom will never end.””

An angel announces Jesus’ birth to the shepherds.

“But the angel said to them, “Do not be afraid. I bring you good news that will cause great joy for all the people. Today in the town of David a Savior has been born to you; he is the Messiah, the Lord. This will be a sign to you: You will find a baby wrapped in cloths and lying in a manger.””

A mighty chorus of angels filled the sky, singing and announcing Jesus’ birth.

“Suddenly a great company of the heavenly host appeared with the angel, praising God and saying, “Glory to God in the highest heaven, and on earth peace to those on whom his favor rests.”” ‭‭

What is it that angels do?

The angels are messengers. They bring Good News.

In other stories where we see angels, they are worshipers. They sit around God’s throne and sing, “Holy, Holy, Holy, is the Lord God Almighty!”

In other situations, angels are ministers. After Jesus’ temptation, it says that ministering angels came and attended to Jesus.

In other stories, angels are defenders, battling on God’s behalf. Whether fighting human armies or demonic, they wield their weapons as mighty warriors in God’s righteous army. They will accompany Christ at His 2nd Coming to wage war in the Battle of Armageddon.

The writer of Hebrews tells us we might encounter angels in our everyday life.

“Do not neglect to show hospitality to strangers, for thereby some have entertained angels unawares.”‬‬

I remember listening the the story of John Paton as a child. He was a missionary to the cannibals of the New Hebrides in the South Pacific. One night as cannibals came to kill his family, they were surrounded by large guards, nine feet tall, holding shields and spears. The cannibals fled in fear. But there was no human guard stationed around Paton’s family. What the cannibals saw was an angelic army standing guard over God’s servants.

This makes me think of Frank Peretti’s classic books, This Present Darkness and  Piercing the Darkness, and the spiritual warfare going on all around us.

Whether defending, ministering, speaking or worshiping, angels are still active today. In Heaven, around God’s throne, of course. But in our midst, unseen, at work on God’s behalf.

I can’t think of a time I’ve had an “angel encounter,” but I’m sure there have been a host of times the Father has sent them on my behalf, or my family’s.

In a daily prayer from John Eldredge that I frequently use, it closes with these simple but significant words. They are a reminder that just as the angels were present and active in the details surrounding the birth of our Savior, they are active in our world today. Just imagine what we would see if God peeled back the curtain for us!

“Father, thank You for Your angels. I summon them in the authority of Jesus Christ and release them to war for me and my household. May they guard us at all times this day. Thank You for those who pray for me; I confess I need their prayers, and I ask You to send forth your Spirit and rouse them, unite them, raising up the full canopy of prayer and intercession for me and my family. I call forth the kingdom of the Lord Jesus Christ this day throughout my home, my family, my life, and my domain. I pray all this in the name of Jesus Christ, with all glory and honor and thanks to Him. Amen.”